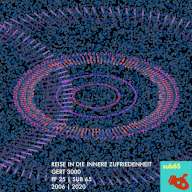 Final Fight Series
Unfortunately, my oncologist thinks I have only months to live. Happily, to err is human. I still have a glance of hope in me and a fighting spirit. But the situation is serious and it does not look good for me. Therefore, I want generally to terminate my meek music production habits and release all the unreleased stuff that is lying around on my computer. Unlike other poeople, I have been warned about my potential demise and I can take things in my own hands. It's a bit like packing for a flight I don't know the departure time.
But just having the stuff out in the web is a relief for me. They will be mostly released on the Genetic Trance netlabel.
I'll try to continue my monthly radio show Slackjackerz ( http://www.slackjackerz.com ) on Kanal K ( http://wwww.kanalk.ch ) together with erhalder, nenad j. and sebastian lindau as far as makes sense (hopefully, it's for a very long time).
I also plan to update my lobit netlabel 20kbps with a few releases that are still in the queue.
I made a series out of the bunch of unreleased material I found on my computer. I called it "Final Fight", coz it feels like a final fight, though I don't hope it's gonna be my last one. As I'm writing this, the series consists of 20 releases. Some are collaborations with erhalder (aka Jimmy SL), the rest is solo stuff.
Barely Hearable [ff08,ff09] was originally planned as a new label for sound stuff that is barely hearable. But with my outlook now, I'm just releasing the already existing material as two albums. However, the sound somehow doesn't even match the description I just gave.
ff11 was a contest set up by erhalder to make a 6-piece ep, where every track should take 5 minutes to produce and there were an additional 2 minutes for doing a homepage describing the EP. He also made an EP, which for time being remains unreleased as I don't have it here.
ff14 was originally planned as a series of releases I would on my mobile phone during my trip home from my slackjackerz radio show. But I managed to do only a handful of tracks, of which I can find only one at the moment.
ff04 and ff10 are planned to be released on my netlabel L.A. No Limits.
ff05 features a german cover version of the beachies hit 'Staying Alive', which now has some special meaning to me.
The covers are mostly based on some fractal pictures I generated with php. I might upload some of those fractals to one of my flickr accounts, either https://www.flickr.com/photos/76735510@N02 , where I have some generated cellular automata stuff or https://www.flickr.com/photos/21201724@N04 , where I have some scan collages. If the covers feature two year dates, then the older is the production date and the newer is the date, I finalized the release. If there's only one year date, it could be either, but the finalize date is always 2020.
There is still some unreleased stuff lying around somewhere, but I can't find it at the moment.
I'm very grateful to all the people who supported me in any way during or before my sickness. Special thanks goes to Alexander Pushkin, head of Genetic Trance for putting 18 of the first 20 releases of this series on his unmatched netlabel Genetic Trance. And Derex for releasing this and other releases on his seasoned and precious netlabel Intox Noize. He also made the covers for these releases. And Adam Sigmund for releasing part of the FF series on his sub65 lobit netlabel. I'm very happy that part of it will appear there.
Greetins goes to the adam's in the usa (Sigmund and Crammond), The Hardliner and the head of Unicode Music. There are probably more people to greet but my chemo brain can't came up with them right now.
Please excuse the rather erratic style of this txt file, they're owed to the current circumstances.
I had, still have and planning to have a very good life. There's no no need get sad about this series. Except maybe about the musical content. I thank everyone who has read this.